Well I hope everyone’s week has flown by in a mostly uneventful fashion! (Don’t want it to be boring but nothing too dramatic is good right?!). Ours has flown by – there have been less missed trains and some work induced anger management required on my part and for Chris well he has been busy making stuff and learning to use some rather large tools which, imagine my surprise, he loves! I am still counting the fingers on a daily basis (all present and correct)! The week could have been a little more dramatic if Chris had eaten the peanut laden museli bar I put in his lunch box… He didn’t though! (Its not life threatening allergy levels but it would have made him sick!)

This week saw the crafting of a bread board and the beginnings of a mallet.

Watch this space on the mallet front but its head is made of Jarrah – well known for its density and beautiful rich red colour.  I have seen it so far and it’s mallet’ish in shape but we’ll wait for the finished product until we give you a look-see!

A few of Sturt’s ex students have stopped by this week for various reasons – it’s great to hear what they are up to now. Other highlights include consumption of a Wham Bar (by Chris who was given it by Simon) – for those of you not familiar with UK confectionary… Imagine an exceedingly chewy pink bar made almost exclusively of a sugary toffee like substance that tastes like fruity candy floss which also features small pockets of sugary sherbet! Does wonders for your fillings if you have them! It’s one of those sweets (‘lollies’ in Australian lingo) that you had when you were a kid and when you come across them in adult life you pretty much lose it … and start raving about the last time you had one or the fact that you can’t remember the last time you had one or and my personal favourite reminiscing about how just maybe they were bigger back then?! Were they?! We will never know!!!!

Pub quiz update – ‘Timberbits‘ came fourth this time! (There was a joint third but still…) Improvement! Whether it was just luck or the team pulling together – time will tell. Last weekend we went to Towradgi Beach Hotel Food and Wine Festival. Scorchio!! Had some lovely food and gelato but no wine was consumed – mostly due to the risk of immediate dehydration. The festival was held in a car park in full sun on a day that was 30 degrees! Fun none the less, if not a little sweaty! On the way home we also managed to buy a rug from a shop that was closed! Good effort I reckon! Guy was unloading something from the van when we wondered into his shop – he did mention it was closed but encouraged us to look anyway! Said rug is made by Fab Habitat and is made from eco-friendly recycled plastic and is looking pretty snazzy in its new home.

This weekend sees some BBQ action! There is an event at the school – A Tools & Techniques Weekend and Chris, along with the other students, is going to be doing some shifts on the BBQ! Luckily Chris is a good chef and an aficionado of well cooked sausages! Personally I like them essentially cremated which I can’t help but feel is a little English of me! Maybe all English people don’t like their BBQ’d meat burnt but maybe that’s how it ends up a lot of the time? This is very stereotypical and I know many great English BBQ’ers but the fact remains is English weather does not encourage the fine tuning of BBQ skills so based on this argument alone there is a higher probability of BBQ mishap and unpredictably cooked food!

Gee some people go on don’t they… I hope you made it to the end this week! You can consider my ramblings over – unlike a face to face encounter hopefully there was no digital equivalent of nodding and smiling while backing out of the room slowly!

It’s a rainy Sunday and this week we have made some exciting progress but before I tell you about that I want to stop and appreciate the fine tool purveyors we have had the pleasure of dealing with so far. Armed with a spreadsheet, painstakingly researched and cross-checked, detailing must and good to have’s Chris has purchased what is needed for his first term of his course from two companies which I can only assume are going to be like a home away from home from now on. The first being Carbatec where the guy greeted the news that Chris would be studying next year with glee. Carbatec’s Price Shavings magazine is little short of awesome! (WARNING – I am a big fan of puns, dad jokes and one-liners and don’t hold it against me but I work in Marketing!) I was won over immediately by the ‘shavings/savings’ situation but looking inside its full of advertising gold! 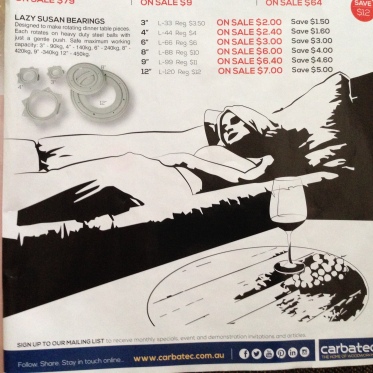 I do believe there are 2 in the picture! Get up Susan -stop being lazy!

Also want to appreciate the fine services of Henry Eckert – importers of the Lie-Nielsen heirloom quality tools. These tools are beautiful – I have no idea what some of them do but they say they will last a lifetime – I look forward to them being part of our journey and perhaps even creating things that also last for our lifetimes and beyond! So… good news! We have found a house to rent… I haven’t seen it in person yet but it looks great. We went from nothing to sorted in three days flat even though apparently it was a very competitive process (who knows whether what the property people tell you is true or not!). By the end of Wednesday we were the chosen ones! Bulli here we come!

It will be a big change from apartment living and being in busy Bondi with its hipsters, glamourati, backpackers, coach tours and ever loyal locals. What are we looking forward to most…